Our trip along the South Rim of Canyon de Chelly followed our drive along the North Rim. We got a tip that the best way to see both rims is to see the North Rim in the morning and the South Rim in the afternoon because of how the sun lights up the canyon. We snacked on a delicious, huge, and fluffy blue corn pancake, a leftover from breakfast, which we had in Thunderbird Lodge café. We planned to check out all seven overlooks on the South Rim drive. Some of the ruins we had already seen during our jeep tour, but we were excited to see them again from the top.

Tunnel overlook is the closest to the mouth of the canyon. The canyon walls rise about 250 feet tall at this point. There is a single tall rock in the middle of the lush valley on the floor of the canyon. An intermittent Chinle Wash, which is filed with water during the rainy season, feeds a grove of cottonwood trees. A trail leads to the edge of the cliff. There is a rickety metal staircase, attached to the canyon wall, which goes to the bottom of the canyon. However, the staircase can be accessed only with a Navajo guide.

Tsegi is the Navajo name of the canyon, which actually means canyon. A remarkable feature here is Blade Rock, a curved vertical wall. A dry wash is turned into a wide road by the jeeps touring the canyon. There was also a hogan and other household structures next to a farmed field at the bottom of the canyon. 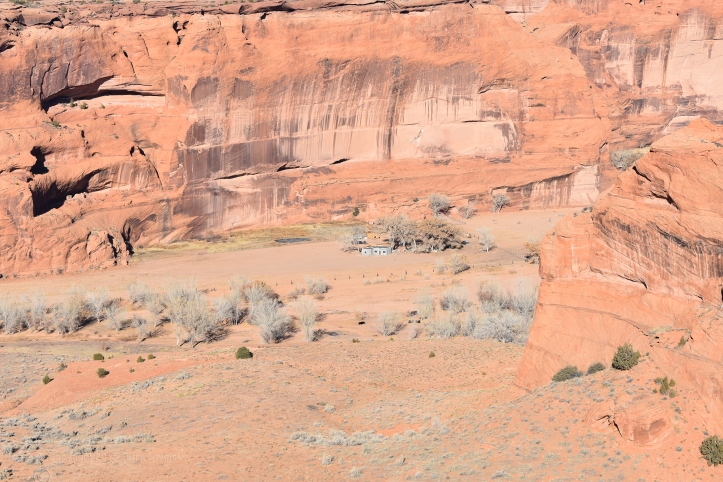 We stopped at Junction Ruins during our jeep tour. Now we could see it from the rim. The ruins have ten rooms located in an alcove of the canyon wall. There is also a recently built house underneath some cottonwood trees. 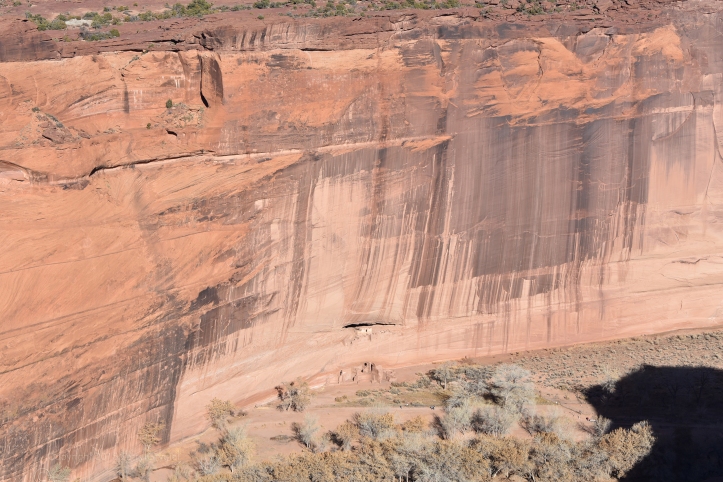 The ruins, which can be seen from White House Overlook, are the most impressive Pueblo ruins in Canyon de Chelly. They were built about 1000 years ago and were occupied for more than 200 years. However impressive they looked from the bottom of the canyon they were dwarfed by the grandeur of 600 feet vertical walls of the canyon. The ruins looked like a doll house, nestled in an alcove of a precipitous cliff. The canyon walls here have different colors, from brown, to terracotta, orange, and beige, streaked by dark shades of desert varnish from top to bottom. There is a hiking trail, which is the only trail that visitors can take without requiring the presence of a Navajo guide. Hikers can go to the bottom of the canyon to see White House ruins. From this overlook there are panoramic views in both directions. Intricate labyrinths of different branches of the canyon are separated by large, balky buttes.

Sliding House Overlook has a few spectacular features. Sliding House ruins were clearly visible in an alcove of a precipitous cliff which had black streaks of desert varnish. However the ruins were only partly preserved. It looked like the foundation rock on which the dwellings were built was eroded by a landslide. 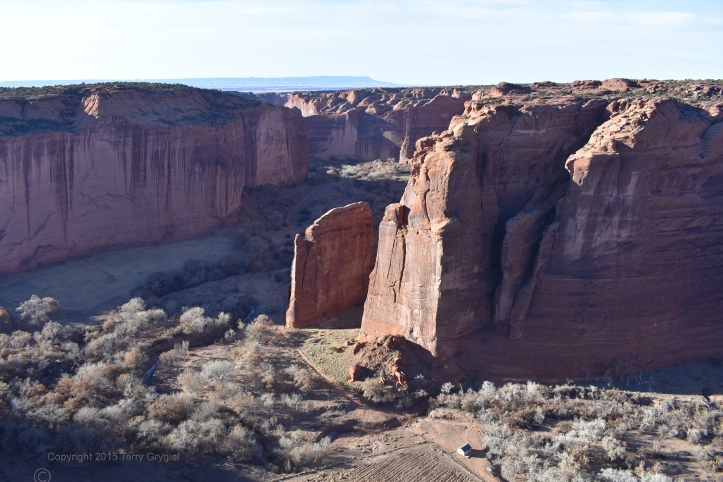 There is also a cute little house with white walls and a green roof next to an expansive farm field. A dirt road curves around a single standing rock in the shape of a fin. There were works of art created by geologic forces of nature. Pinnacles of stacked layers of sediment with smooth, circular or curvy shapes told the story of a swirling water stream flowing through the canyon and eroding the canyon walls. There were shady caves high above the canyon floor underneath an overhanging ledge.

At Face Rock Overlook we saw a whimsical rock formation of a purple hue. We also spotted a few ruins, which had living quarters and granaries built on a long, narrow ledge somewhere in the middle of a 700 foot high canyon wall. How were dwellers able to get inside their homes and get out? There would not be another way except for rope ladders and foot and hand holds. 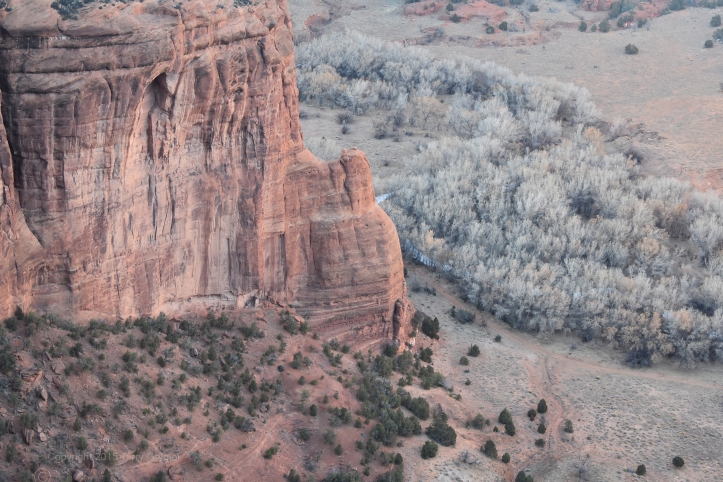 In the parking lot we met an abandoned dog with two young puppies. The dog looked at us with hope in her reddish eyes while her puppies were playfully clinging to us when we passed by. They rubbed their noses against our legs and sobbed in a friendly manner. A fellow traveler told us that she had already notified park rangers about the dog and her puppies. We could not take this poor dog and her puppies home because we already have two cats. But it was heart breaking to leave them there. We continued walking and the dog realized that we were not going to adopt them. She gave us a sad and forgiving look and laid down patiently to wait for another chance. 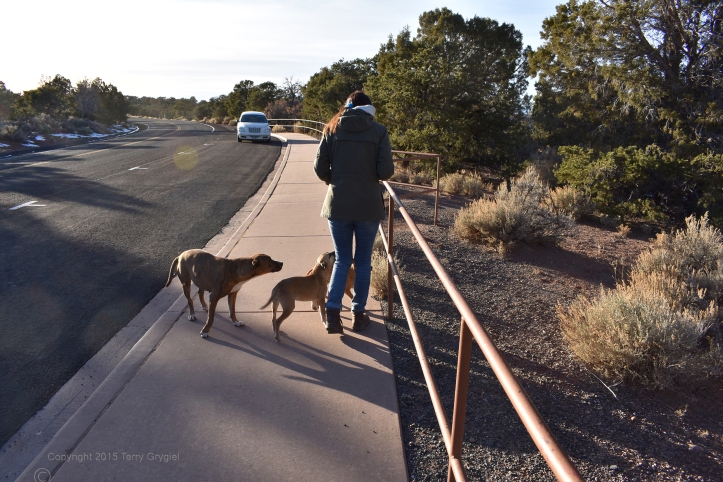 On our way back we did not see the dog and her puppies. Most likely they were picked up by a park ranger.

There is a quarter of a mile path on the east side of the parking lot, which leads to the overlook. Spider Rock is one of the most popular and photogenic geological features in Canyon de Chelly. It is an 800 foot tall spire, split in the middle. Two pinnacles, differing in height, look like two adjacent fingers. This double spire is located at the confluence of Canyon de Chelly and two other southern branches: Bat Canyon and Monument Canyon. The elevation at Spider Rock overlook is 7000 feet. The craggy cliffs of the canyon are overgrown by juniper, pinyon pine, yucca and bushes. There were little patches of snow between the trees. The water in Chinle Wash, which flows around the double spire, was partly frozen.

According to Navajo beliefs Spider Woman is a protector of humans. She also gave people the knowledge and skills needed to grow cotton and to weave. When a baby girl is born, a spider web has to be rubbed into baby’s hand. This assures that she will be a skillful weaver when she grows up and her hands will never get tired of weaving.

Canyon de Chelly is a wonderful place, full of history, legends, and natural beauty. If one is looking for an adorable puppy or two to adopt, you may also find them there.