London has Big Ben, Vienna has Anker Clock, Bern has Astronomical Clock on Zytglogger Tower, but Yellowstone has Old Faithful. 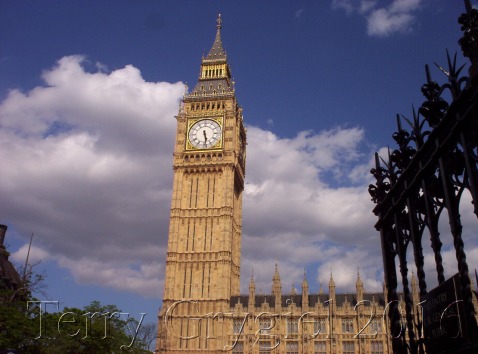 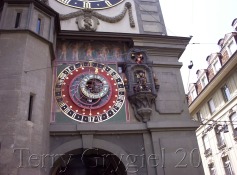 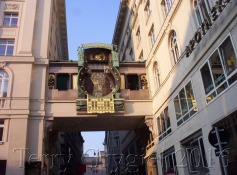 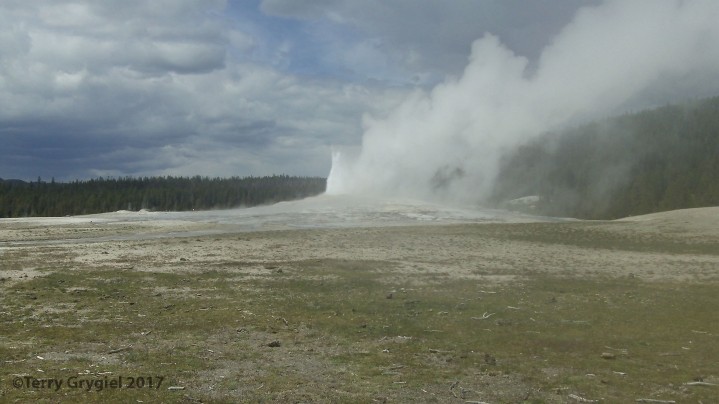 As its name indicates, he is very true to its nature, because every eruption of this geyser happens every 90 minutes (plus or minus 10 minutes). To see Old Faithful and how it erupts was the ultimate goal of our first day in Yellowstone. However, there were lots of marvelous scenery and a great number of surprises on just about every turn of the road.

We started our journey from Jackson, a little town in Wyoming, located in a valley called Jackson Hole. It is about a one hour drive to the southern entrance to Yellowstone National Park. Jackson is neat and pretty. It was a pleasure to walk around the town, which has lots of art galleries, cafes, a theater and a museum of local history. There is a central park downtown with arches made of antlers on each corner of the park. Having your picture taken under an arch will give you good luck for the rest of the year. 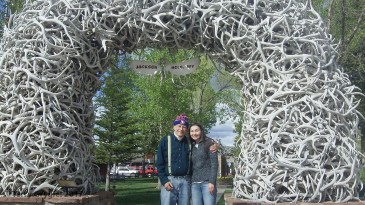 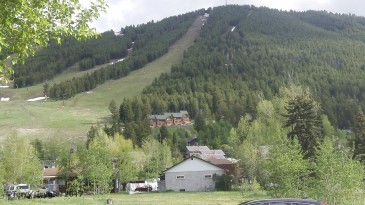 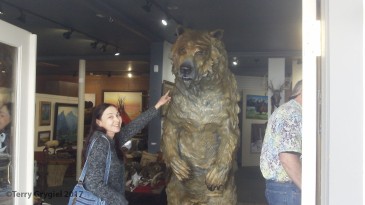 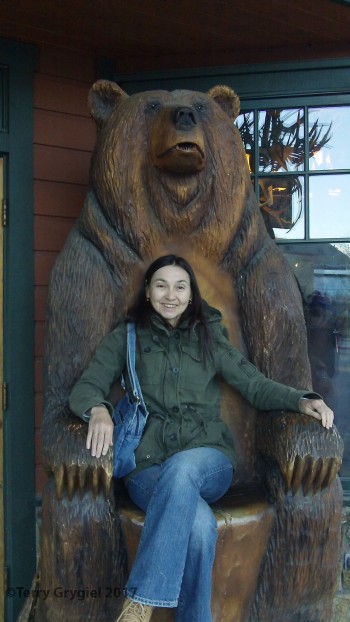 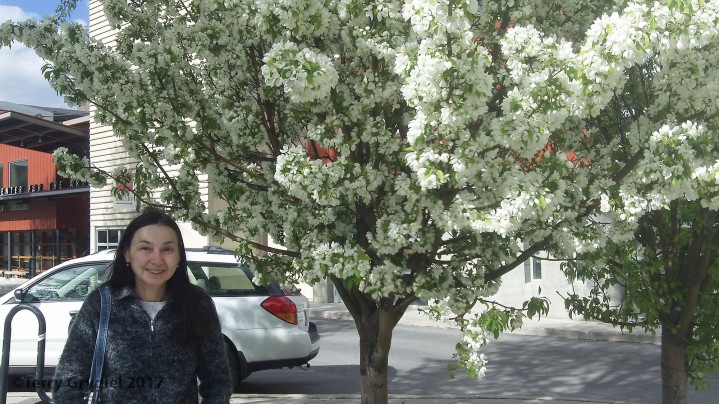 Wooden caved figures of grizzly bears and cubs decorate the exteriors of art galleries and shops. It’s a backup for someone who could not find a grizzly in Yellowstone to take a selfie with. The streets are lined with apple trees and other flowering trees, which were in full bloom in late May. A light breeze swayed the trees and the whole town was covered with a white cloud of blooming flowers and their sweet, delicate fragrance.

We left Jackson and the road took us through Teton National Park, a gem, which definitely deserves more time to explore.  When we drove along the Teton Mountains we spotted our first bison, enjoyed awesome views and stopped occasionally when the view was too irresistible to pass by. 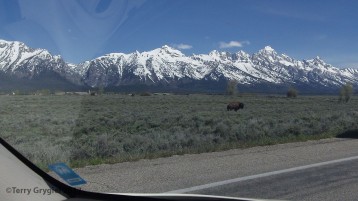 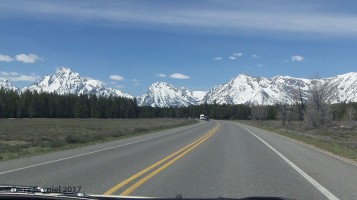 The Teton Mountains looked austere and dominating with their abrupt and sheer cliffs. Their craggy, snow covered rocks, rise like giant mammoths, whose life and extinction they have witnessed. Slender, rickety aspens frame the sapphire-blue lakes at the foot of the mountains. 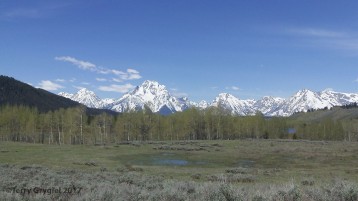 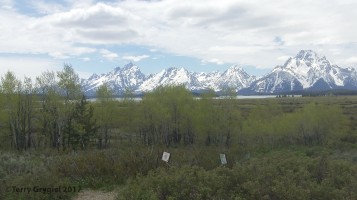 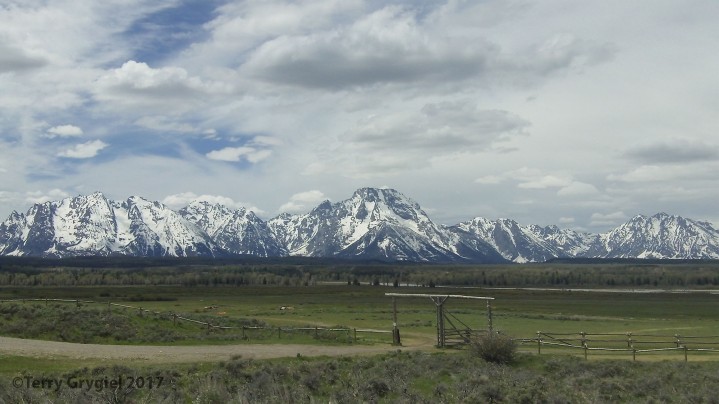 The Grand Teton Mountain Range was formed about 10 million years ago. A series of earthquakes created movements of two blocks along the Teton fault. The mountain block rose upwards and the valley block dropped down. With every earthquake the mountain block rose about 10 feet and the valley block dropped 30-40 feet. Currently the total offset along the fault is about 30,000 feet. The highest peak is Grand Teton, which is 13,770 feet high. 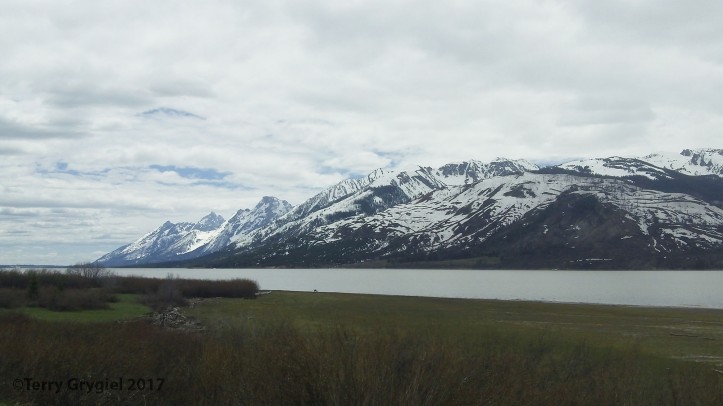 The real beauty, Jackson Lake, serves as a mirror to reflect the jagged cliffs of the Teton Mountains.

From Jackson Lake the highway winds along the Snake River and continues along its tributary, the Lewis River. The river is named after Meriwether Lewis, one of the leaders of the Lewis and Clark expedition. Its character changes. Sometimes the river is squeezed into a narrow gorge and has whitewater breakers on its dark surface.  At other times the river looks calm and barely has any ripples. Fir trees on the bank of the river look down at their reflection in the smooth surface of water. 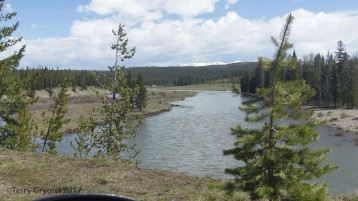 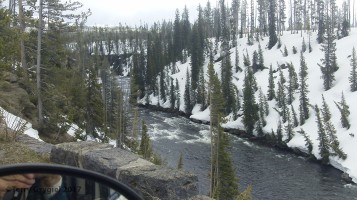 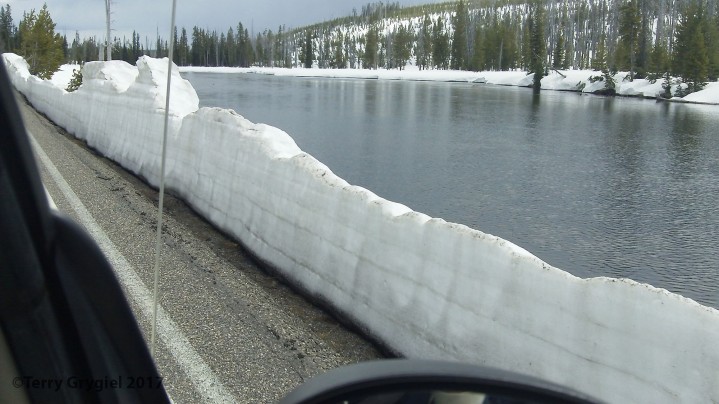 We saw a few mule deer grazing on a newly grown grass interspersed with tiny yellow flowers, even though there were patches of snow between the trees. Lewis Lake was still frozen, but we had a glimpse of Shoshone Lake from the snow packed pull out close to the Continental Divide. There was still snow in late May at Craig Pass at an elevation of 8,262 feet.  The surface of snow was hard. We could easily stand on it. 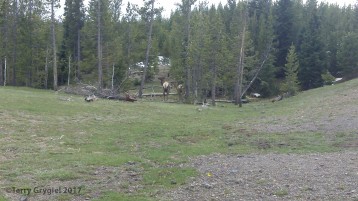 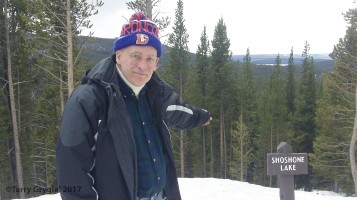 Our next stop was at Kepler Cascades. We were going to take a short hike to the Lone Star Geyser, but all hiking trails were closed in Yellowstone National Park due to the danger of meeting grizzly bears with their cubs.  Kepler Cascades is spectacular. The water tumbles 50 feet down a rocky cliff. The stream was so strong that it took down a few fir trees. The lookout platform was built almost over the cascades, on the edge of a narrow gorge. The swooshing sound of the falling stream was so intense that it muffled all other sounds. The strong wind blew away words, blasting us with a spray of water from the cascades instead. So invigorating! 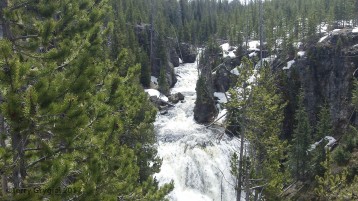 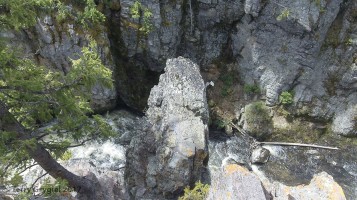 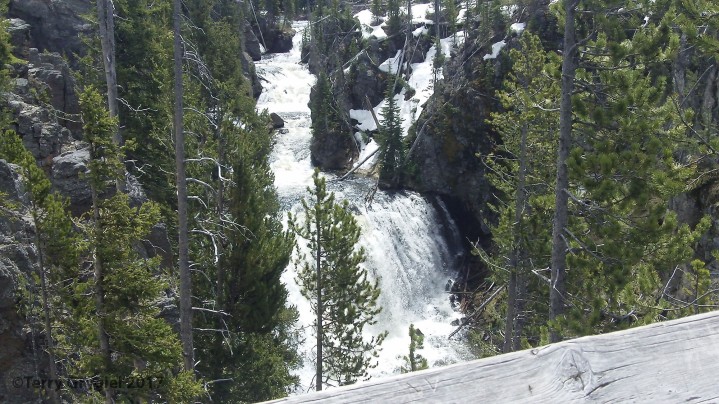 Finally, we reached the highlight of our first day in Yellowstone, Old Faithful. The time of the next eruption was written on a board in the Visitor’s Educational Center, which has lots of information on the volcanic and hydrothermal activity in Yellowstone. We could not wait and joined the crowd of excited tourists on the boardwalk built around Old Faithful. The time of eruption was past and there was a spirit of anticipation in the air. Old Faithful started its long awaited performance 10 minutes later with a whisk of steam. Then the first fountain of boiling water appeared, sprouting stronger and higher into the air. Dancing spurts of water, rising about 30 feet high, created a cloud of sulfur smelling steam. The wind was blowing in our direction and this steamy cloud began moving towards us causing commotion in the crowd. To our amusement we got showered with warm sulfur rain from the cloud.  We hectically pulled on our hoods and tried to cover the camera. But that was not all. Old Faithful repeated the whole performance again with sprouting jets of sulfur smelling water and steam, showering us. 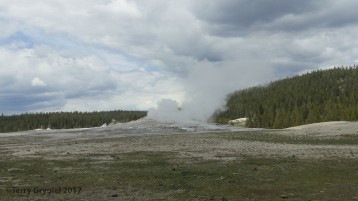 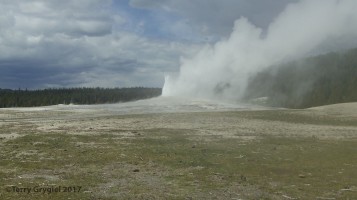 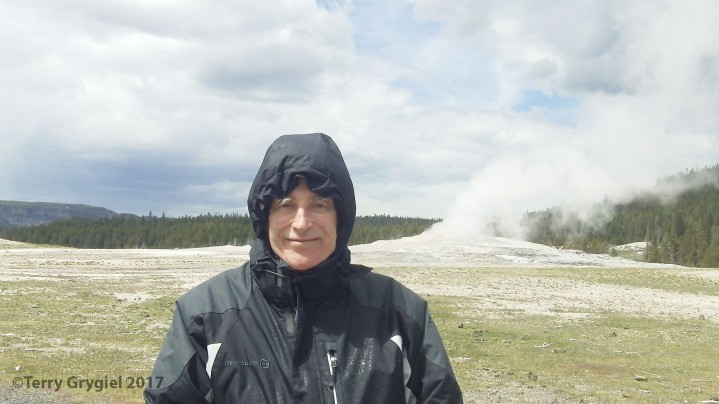 Shacking of the drops of water and laughing we continued our discovery walk in the Upper Geyser Basin.