image Saint Canice Cathedral and the Round Tower in Kilkenny

Kilkenny is a small city with enormous history, which is more than 1500 years old. It is a real treasure for history enthusiasts. There is a magnificent Anglo-Norman Castle on one side of the town. It was built on the bank of the river Nore. On the other side of the town, on the top of a hill, stands the imposing Saint Canice Cathedral and the Round Tower next to it. Medieval houses and churches line the streets, which were laid out between the Castle and the Cathedral. High Street and Saint Kieran Street, which connect the Castle and the Cathedral, are called the medieval mile. 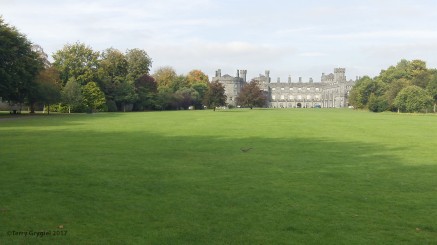 Kilkenny evolved from a settlement, which was built around a monastery. The monastery was founded in the 5th century A. D. by Saint Canice and got it name after him. “Cill Channigh” means the Church of Canice in Gaelic. This later became “Kilkenny.”
The monastery was built on a hill overlooking the river Nore, which flows through the town. Saint Canice came to this area, which had been an ancient kingdom of Ossory, from Northern Ireland to preach Christianity. He and his best friend Saint Columba were among the twelve apostles of Saint Finnian, who was a gifted teacher of the Sacred Scriptures and a founder of Irish monasticism.

While Saint Canice stayed in Ireland, Saint Columba went to preach Christianity in Scotland. There is a legend that Saint Columba was taking a voyage to Scotland, when a storm began. His fellow monks in the boat were shaking from fear but Saint Columba remained calm. When he was asked why he felt so confident Saint Columba replied that his friend Saint Canice will pray to God and it will save them. Meanwhile, Saint Canice woke up suddenly in his cell with an urge to pray. He rushed to the church so fast that he lost his shoe on the way. His prayers were heard and a miracle happened. The storm subsided and Saint Columba and his followers reached Scotland safely.
The life of monks at Saint Canice monastery was pretty hard. They built the monastery from timber they cut in the area, pulling the logs to the top of the hill. They prayed, and sustained themselves on a diet consisting of porridge, nuts and berries, which they picked in the woods.

In the 9th century, the King of Ossory chose Saint Canice monstery as a royal monastery. As a consequence, a new church was built of stones in place of the old wooden one and the life of monks changed for the better. Instead of a meager diet monks dined on meat, fish, vegetables and wine. The King’s and Bishop’s residences were built next to the church and the settlement of monks, craft workers, and farmers grew into a thriving community.
In 1111 Saint Canice became a Cathedral and the main religious center of the diocese of Ossory.

In 1210 construction of a new Saint Canice Cathedral began. The construction lasted for more than 70 years. Teams of stone masons, diggers, stone cutters, sculptors, and glass makers worked day and night to finish this Gothic architectural masterpiece. There is a striking contrast between the austere exterior made of stone and the colorful and artistically decorated interior of the Saint Canice Cathedral. After entering the Cathedral visitors can see that the towering walls of the Cathedral are decorated with elaborate doors, arches, vaults, and columns. Stained glass windows are remarkable pieces of arts, depicting saints and scenes from the Bible. Marble floors in the Sanctuary and parish chapel are laid out in four different colors representing four different regions of Ireland: the green marble of Connemara – Connaught, the black marble of Kilkenny – Leinster, the grey marble of Cork – Munster, and the red marble of Tyron – Ulster. The construction of Saint Canice Cathedral was completed in 1285. 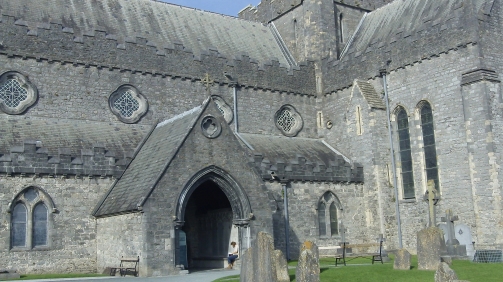 The Round Tower was built during the 9th century. It served as a watch tower and was also used to protect church treasures from Vikings. Originally there were no permanent stairs leading to the entrance door of the tower, which is built high above the ground. This fact suggests that treasures were brought inside, the ladder was pulled in, and the door was shut close in the face of approaching invaders. The tower is 100 feet tall. 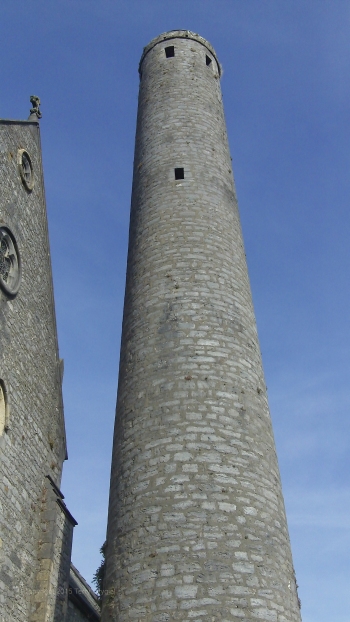 The Round Tower is the oldest existing structure in Kilkenny and offers a breathtaking 360 degree view of the surrounding area. To get to the top of the tower visitors have to climb 121 steps up using steep wooden ladders built inside the tower, with one ladder on each of the seven levels. If the view from the top would not make you dizzy it will certainly take you breath away. On the top of the tower there was a bell, which rang out the time for the monks. The Round Tower is the only structure that remains from the wooden monastery.

More stories about Kilkenny to come.