Taos is famous for its colorful history, Indian Pueblo, and thriving art community. Taos’ unspoiled nature offers endless recreational activities, such as skiing and skating in the winter or hiking, biking, horseback riding, and whitewater rafting in the summer.

The Rio Grande River is the fourth longest river in the U.S. It serves as a border between the Unites States and Mexico. It also plays an important role in the irrigation of crops and provides an opportunity for whitewater rafting. The rapids close to Taos range from levels 2 and 3 for beginners to level 4 for more advanced rafters.

Whitewater rafting is fun and exciting. But it is also a dangerous sport – a battle between rafters and wild nature, which can end in injury or death. This is why the skills and the knowledge of a river guide are essential for the success of whitewater rafting.

We chose to raft down a part of the river known as the Racecourse. This is a two and a half hour trip for beginners, organized by a company called ‘Far Flung Adventures’. First we drove 16 miles south from Taos to the Pilar Yacht Club and Café. Then we boarded a bus, which drove us to the starting point for our trip. Our guides took down the boats and dragged them to the river. They helped us choose our helmets, lifejackets and oars. After brief instruction on river safety, we took our seats in one of the three boats.

There were six of us in our boat, three on each side. Our guide explained to us that we are a crew now and need to listen to his commands in order to avoid a shipwreck. There were four basic commands: left-forward, right-forward, left-back, and right-back. These commands indicate on which side of the boat the rafters should row and the direction they should row. Our guide then pushed the boat away from the bank, jumped into it and took his seat on the stern. His responsibilities were to watch the river and to steer the boat with his oar.

The Rio Grande River carried our boat downstream. The water was cold, swift and had a brown color due to the soil in it. There were relatively calm stretches of the river. Our guide told us about the history of the area. He also told us about the people who lived on the banks of the Rio Grande, which we were passing by. Calm water changed into a bumpy ride with occasional splashes and maneuvering between large boulders rising from the water. Our guide changed his commands very quickly to avoid hitting the rocks. ”Right-forward, left- back” he yelled, then the next moment: “left-forward, right-back.” Phew! We passed huge boulders unscathed. 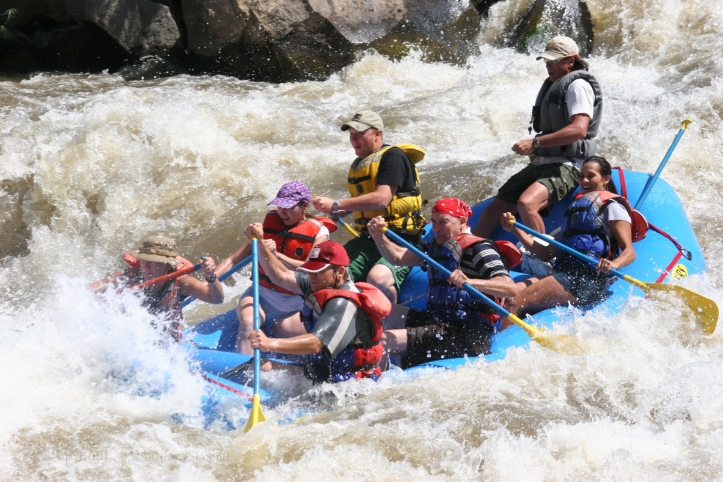 Once we were really scared because our boat almost crashed into a boulder. Our guide stuck his oar into the boulder and pushed the boat away. We were rowing so fiercely that we passed another boat, which had been ahead of us. Our guide suggested: “Let’s take them aboard!” When our boats came alongside he shouted out: “Give us your gold and your women!” In response our potential captives struck their oars against the water and showered us with lots of splashes.

We let them take the lead because we were fast approaching the highest whitewater rapids of our trip. “Here it comes!” warned us our guide. First, the river tossed our boat up like a wild bronco. For a moment we rowed in the air. Then, our boat plunged, prow down, with a huge splash! We were showered from head to toe. That was the highlight of the trip. A photographer was taking pictures of us from the bank of the river at this particular moment.

After we passed the major rapids our guide encouraged everybody to swim in the Rio Grande. The water was very cold and we were floating in our lifejackets, carried by the strong current. People, who had waterproof cameras, took pictures while floating.

Once we stepped onto the bank our guide congratulated us with passing level 3 whitewater rapids and invited us to have some soda and snacks.

That was a memorable adventure through wild rapids on the Rio Grande River.